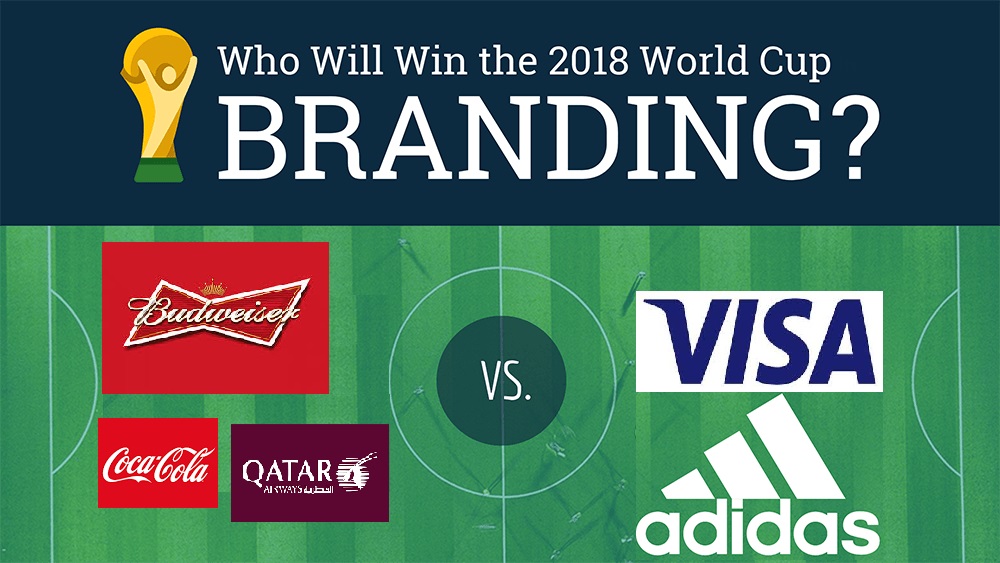 The wait is nearly over, Russian edition of FIFA 2018 World Cup is now set to take over. Mid June; lights, camera, and action will turn to Russia when football biggest tournament kicks off.

It’s the time when the biggest global brands across categories like beverages, sportswear, auto, durables and everything else, send lucky customers flying across the world from their home countries to centre of the action. These lucky customers get picked from various social media contests and physical football skill competitions to have a once in a lifetime opportunity.

There is no Chinese team at the 2018 FIFA World Cup, but when the tournament starts Thursday at Moscow’s Luzhniki Stadium, spectators will see six Chinese teenagers courtesy sponsor Dalian Wanda Group Co bearing FIFA flags and leading players onto the field.The world will see a domination from chinese brands at Fifa 2018 world cup

Five FIFA World Cup sponsors  Budweiser, McDonald’s, dairy company Mengniu, electronics manufacturer Hisense and smartphone company VIVO  have come in return for their logos to be featured across Russian stadiums, as well as media exposure during the World Cup.

Having their assets activated in over 180 countries, Coke’s World Cup offensive beats every other brand in scale and scope of execution. Coke HQ has supposedly for first time given its country markets freedom to customise everything from on-ground BTL activations and social media content

Coke is further taking the power of the property onto labels for the first time under the ‘Share A Coke’ Flagship programme. 750 ml Coke packs will carry relationship labels like Coach, Fan, Mentor, Bro etc

As part of Global Campaign coca cola has released series of 3 ads each targeted at a different audience .Coke is talking about “being ready”

“Stock up” urges footie fans to buy their supply of Coke before the match starts.

In “Ready for”, it is bottles of Coke being given a pep talk to prepare them for their role of being drunk by said football fans.


Budweiser-Lights up the world cup

Embarking as described by AB InBev as its biggest ever commercial campaign, Budweiser’s World cup act includes a TVC  called “Light up the world cup” .This featuring a fleet of drones carrying bottles of the beer from its brewery in Missouri to spectators around the globe, including in the Luzhniki Stadium in Moscow.

At a BTL level a slew of  experiential activities have been planned .Along side this, there is a raft of experiential activity. The brand is distributing eight million Budweiser red light cups globally, which contain audio detectors and LED lights that glow brighter when the sound level increases.

The Bud Bot, is a chatbot offering a range of tools designed to augment the fan experience, from providing a platform to vote for the official man of the Match, to offering home deliveries of Budweiser.  Bud Boat will make its home on the river Thames, hosting screening parties, DJs and bars for football fans in London

Budweiser will take over 1500 hotels and brand them ‘Bud Hotels’ in Russia .These Hotels which will screen matches in large screen and be activation hotspots for the brand. 35 ‘lucky fans’ will get to stay at one of these locations

Taking the idea to its logical conclusion will be Bud Homes. This gives Budweiser the opportunity to step up home-viewing experiences and turn living rooms into fan zones

Adidas-How deep is your love at Fifa 2018

World Cup 2018 will also see Adidas launch its “most customizable film in the world” with special edits for different international markets.

Long-time FIFA brand partner and official sponsor of the World Cup  adidas is kit sponsor for 12 of the 32 teams (that’s 2 more than Nike), including Germany and Spain, and has on its roster top players like Lionel Messi, Paul Pogba, Gabriel Jesus and Mesut Ozil.

Adidas is expecting to amplify the action on social media through their tie up with whatsapp.it will release 100 special GIFs for the FIFA world cup. They expect to catch in on the bulk of conversations and banter around the tournament through this medium. Adidas India is trying a hand at ‘moment marketing’, which is tapping into micro moments.

The brand is leveraging digital, outdoor and on-ground activations to connect with fans across cities like New Delhi, Mumbai, Kolkata, Pune, Chennai, Cochin and Guwahati.

The brand, for instance, has installed an interactive billboard in Delhi which says “You always need 11 players to make 1 Goal”. The hoarding has a football installed with a pulley that requires
11 people to pull it and score a goal. The objective is to celebrate and reward the spirit of coming together for a team sport.

Taking a cue from the obsession with the official FIFA World Cup ball (Telstar 18), the brand has put up a giant 3D version of it in high traffic locations across different cities.
It will also have a live 2D scoreboard in New Delhi, Mumbai and Bengaluru
to keep football lovers abreast with the latest scores

Also in pipeline is consumer engagement space called ‘Creators Hub’ in Mumbai’s Oberoi Mall and Bengaluru’s Phoenix Market City where fans can engage with a
timed obstacle circuit that will challenge their dribbling and shooting skills.

Another FIFA Partner, Visa ran a Shop-Pay-Go contest in partnership with Amazon Pay in April. In a first of its kind promotion by Visa since its association with FIFA in 2007, fans needed to purchase the most number of products on Amazon, using a Visa card .The campaign was aligned with Visa’s role as an enabler of dreams, aspirations and reimagined experiences.”

Visa has made Zlatan the face of its summer campaign. This controversial personality has a reputation of showing out on the biggest stage win or lose and surely Russia will be no different.

Qatar Airways has come out with their 60 sec FIFA Spot. Singer and TV star Nicole Scherzinger has recorded soul classic dancing in the Street to celebrate FIFA Tie Up. The all-singing, all-dancing spot features passengers, cabin crew and even a goldfish miming to the song

KIA Motors-Get into the game

Another official partner KIA motors is giving chance to 64 children to carry the ball at FIFA 2018 .The campaign will generate good awareness for the Korean major

Chinese smartphone brand Vivo announced the launch of Vivo #PassTheSwag, a global dance movement aimed to unite both football and music fans around the world to create an iconic memorable moment for the 2018 FIFA World Cup.

This iniative is an attempt to bring people together through a common dance language and dance to the tunes of the Official Song for the 2018 FIFA World Cup Russia. Vivo hopes to empower fans to capture unforgettable memories and express themselves through Vivo #PassTheSwag during the World Cup

photographer programme, which provides fans unprecedented pitch-side, stadium and warm up session access to capture and share these extraordinary moments

How your brand can make best of Fifa world cup:

While big Fifa sponsors sweat it out,lets look at how you can make best of world cup if you are  a small business owner

1)Run a physical skills/game contest of football in your outlet and give some goodies Eg:-Ball handling contest