Flipkart Ltd again beat arch-rival Amazon again in the flipkart vs amazon festive season sales battle in 2018, underlining its tactical superiority and marking strong end to a year in which it turned around its fortunes and secured its status as the country’s largest online retailer.

The year 2018 brought an amazing turnaround to the Indian ecommerce sector. Flipkart is now a Walmart company, which means that the  Amazon’s edge as it is a deep-pocketed player is now over.

The festive season period  saw a greater surge to 2.3 Bn from 1.4 Bn a year ago as per market reasearch firm Red Seer consulting.2017 was a turning point for e-commerce in india , as online retail grew by more than 25% for the full year after a sluggish first-half performance

Amazon India overtook Flipkart with $7.5 Bn in gross merchandise value (GMV) in the financial year ending March 31, 2018, according to a report by investment bank and financial services company Barclays entitled ‘Amazon Races To The Top Of India ECommerce.’

Flipkart, had a GMV of $6.2 Bn on a standalone basis (excluding its subsidiaries Myntra and Jabong). If these fashion units are included, Flipkart is neck-and-neck with Amazon India in terms of GMV.

Also, it’s worth noting that India contributes only 2% of Amazon’s global GMV. “Admittedly, in the current tape where investors are de-risking for other reasons, the 2% of GMV that comes from India isn’t going to move the needle on the narrative,” said Barclays.

“Flipkart has a bigger pie of revenue than Amazon ($3.8 Bn vs $3.2 Bn), although Amazon is catching up quickly and continues to grow much faster (82% vs 47%),” the report said. Flipkart operating losses could be in the $1.5 Bn range for the year ending January 2020.

The report also noted that Amazon is rapidly increasing its investments in its India unit .

For the festive sale days flipkart is a clear leader with more than half of the GMV of the entire ecommerce industry. Between Flipkart and Amazon, the sales GMV share was 62% and 38% respectively. Flipkart’s higher share was driven by its substantial sales figures in mobiles and fashion verticals.but compared to 2017 the shares were 58 & 26 % of amazon and flipkart which means amazon has made a comeback in 2018 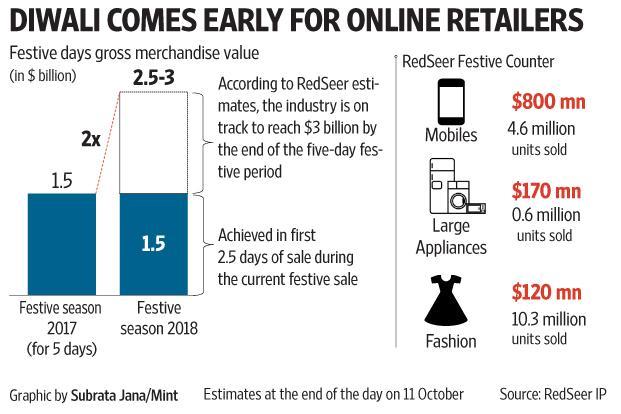 With India accounting for around 300 Mn smartphone users and 460 Mn internet users, the ecommerce platforms registered a massive 46% Y-o-Y growth in sales volumes and contributed to half of the overall sales in the country, according to Karn Chauhan, the research analyst at Counterpoint.

He said, “Flipkart stood out due to the most number of exclusives while Amazon benefitted some from the launch of OnePlus 6T.”

Flipkart made a total of 1, 00,000 ads which were sent to specific customer segments based on the categories. Such a scale marketing was done for first time in the industry

While Amazon has a far broader product assortment, Flipkart focuses more on putting together a compelling collection of exclusive brands and products for such sale events. These products are identified months before the event, and Flipkart sales employees are pushed to do everything to secure them on an exclusive basis. During the sale, the company offers attractive prices on many of these products, which are prominently placed on its app and websites

Apple Inc.’s iPhones, Xiaomi phones and VU television were the Hero products delivering the major chunk of the flipkart sales whereas amazon focused on bouquet of products with no major focus products Amazon in their #KaroMilkeTayyari commercial focused on the joy of preparations together for the festive season. Emotional route is taken to highlight that festivals are to be spent with families and friends, while all you have to do is return home, Amazon is there to take care of essential things like shopping for your near and dear ones.

Flipkart  engaged with the users through their #BigBillionDayHunt, where all one needed to do was to spot the offer and share them in the comments section and say which one they loved the most and why. Gift vouchers worth Rs 20,000 was up for grabs. The brand used hashtags like #TheBigBillionDays and #AbMehengaaiGiregi to drive conversations online Flipkart has also tied up with online content platform TVF to promote the upcoming ‘Big Billion Day’ sale through a hilarious video. This is the third year of their partnership and views on the video crossed 1.2 million on YouTube. Amazon on social media was mainly promoting details about their sales, like no-cost EMI and easy exchange, just ahead of the Great Indian Festival

While speaking of brand recall, it is Flipkart, which stands out. Flipkart followed their unique strategy of using kids for their commercials since its very first commercial back in 2011. Flipkart has established its communication route with kids being the cast, adding an angle of humor and cuteness constantly. This helped to improve recall drastically while the new angle of “Ab Mehengi Giregi” created an instant connect across the classes and masses

Even though Amazon’s emotional touch has managed to make people feel homesick this festive season, Flipkart surely has created more conversations and stood out in all their creatives, which were more relatable and humorous.

This growth is said to be driven by factors such as rising internet penetration due to jio, range of payment options, and increase in delivery infrastructure, among others. Going forward, with well-informed millennials and discerning consumers, the strategies of these companies will play a key role in market dominance.

With the Flipkart cofounders out of mainstream operations, Walmart will play the Indian ecommerce market with its own rules, with Kalyan Krishnamurthy, the current Flipkart CEO. Amazon India, is buoyant and  continues to invest heavily in india despite on the loss front. This year, Paytm Mall emerged as a distant third competitor but is eyeing the top slot with its aggressive sales strategy. Paytm Mall is backed by Chinese behemoth Alibaba.

In 2019, Will Amazon India and flikart continue their run?Will Paytm Mall  gain a substantial share of the market. Or will we see the rise of new or existing players such as Snapdeal, which claimed profitability this year?

Whatever be  the case, in 2019  ecommerce’s fab duo Amazon and Flipkart are expected to continue their battle of dominance in Indian ecommerce.